In this article I’d like to show how we can use Windows AppLocker in Windows 10 Enterprise to allow only a small subset of programs to run in an enterprise environment. As you already may know AppLocker rules function as an “allow” list meaning that you’re allowed to run only those applications which have the corresponding allow rules in the AppLocker policy.

Suppose our goal is to restrict users to run only a single third-party application installed by an administrator, for example 7Zip. Theoretically we must use a sample PC with the needed applications installed for creating an Applocker policy locally and then exporting it to Active Directory GPO, but for the sake of this test I will create my Applocker policy using 7Zip installed on my DC.

To start with, let’s take a look at my client computer – Win10Ent (Applocker policies may be applied only to enterprise OS versions!): 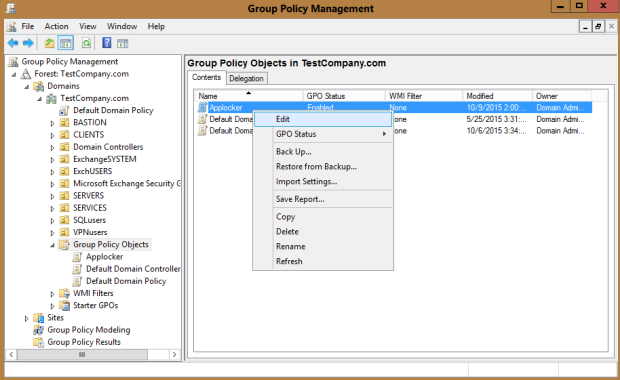 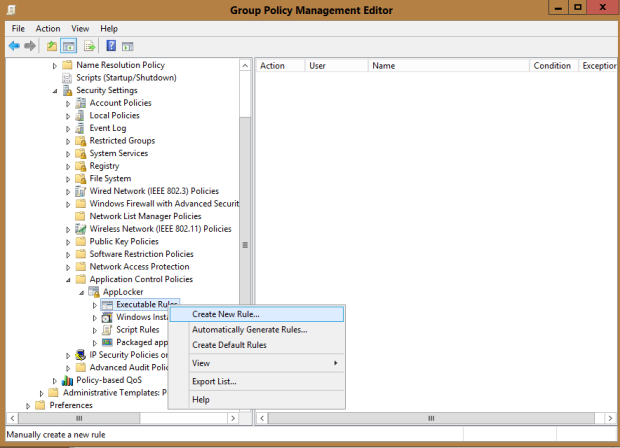 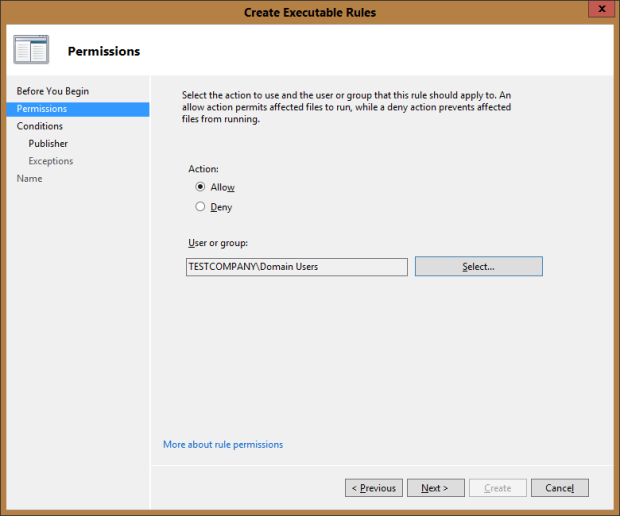 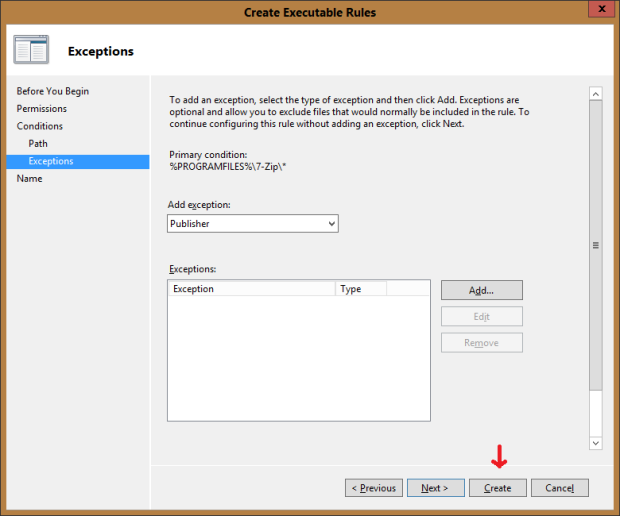 The first default rule that allows everyone to run programs located in the Program Files folder must be deleted – otherwise MS Excel Viewer will be implicitly allowed to run for all users. 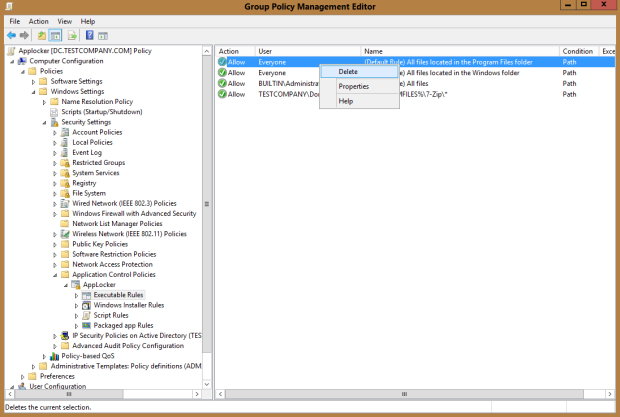 Now we must enforce the rules: 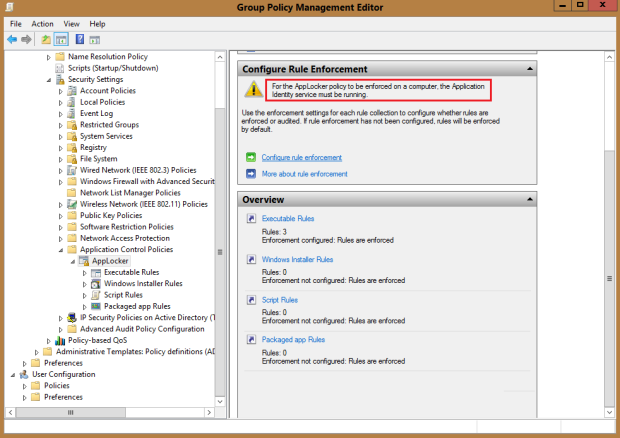 After restarting my client Win10Ent (or running gpupdate /force ) – up to two times as group policy might just be read after the first restart/gpupdate and only after the second be applied – the policy must be applied and Application Identity service must be running: 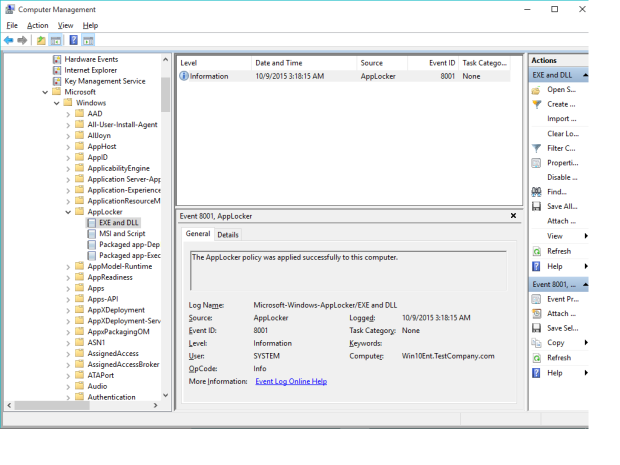 Both 7Z and MS Excel Viewer open successfully because there’s the AppLockaer rule stating “(Default rule) Built-in\Administrators  – All folders.” – exactly what I expected to see.

II-b) …but can not run MS Excel Viewer: 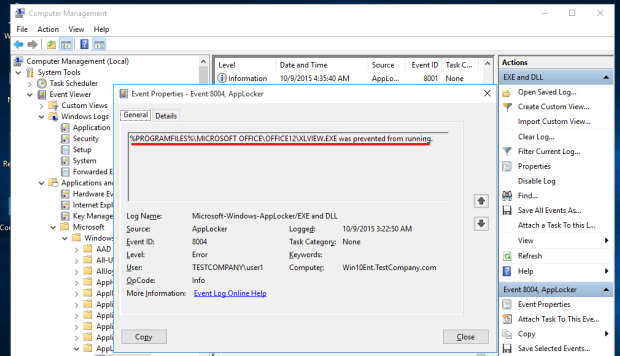 Again, all works as expected. But let’s try to run the built-in Calculator as Admin and User1 and look at the results:

or by double-clicking the binary itself:

– there’s the default rule allowing everyone to run any files located in the Windows folder so why User1 has not succeeded in running Calc.exe? If you take a closer look at the Calc item in the Windows\System32 folder you will definitely notice that Calculator in Windows 10 is a Metro-style app which will eventually be run from the Program Files\WinApps folder (for example you can run it by typing CALCULATOR:// into the Run box), the Calc.exe in the System32 folder is just a wrapper that refers to the Program Files\WinApps\Microsoft.WindowsCalculator_… subfolder.
Given that there’s no AppLocker rule that would allow TestCompany\Domain Users to run programs from WinApps folder this behaviour is by design.

We can make sure this is the case by running Notepad which is the old classic application from the same Windows\System32 folder: 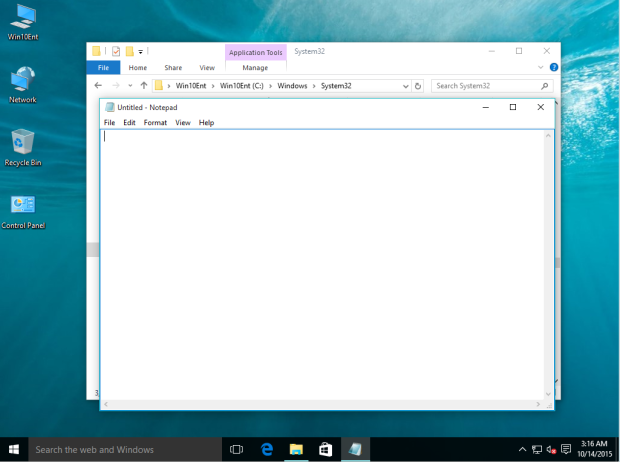 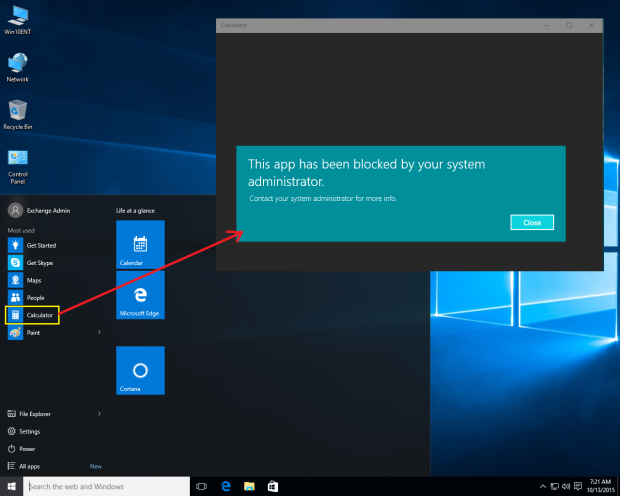 Although there’s the explicit allow rule for Built-in\Administrators for all folders (including Program Files\WinApps) this administrator (TestCompany\ExAdmin) could not run the built-in Calculator.

Furthermore, if we look in the AppLocker log we’ll see that blocking Calculator produces the “Allow” event (both for Administrator’s and User1’s accounts):

Whatever the reason is for blocking the built-in Calculator Windows should not register “allow” event 8002 instead of “deny” 8004 event – this is the first bug in Applocker/Windows 10 Enterpise configuration.

SQL 2014: Deploying AlwaysON in a guest cluster step by step